Last fall I sat on the Southern Steps in Jerusalem. These steps are remains of the Temple, God’s dwelling place on earth. It was a beautiful, sunny day and I had butterflies in my stomach, sensing the Lord’s presence, knowing that I truly was on holy ground. 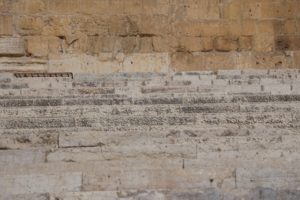 (The Southern Steps leading up to where the Temple would have been.) 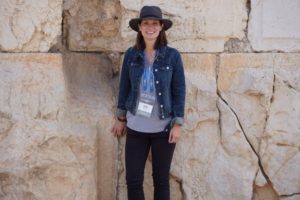 (Part of the original wall. The first layer is almost as tall as I am.) 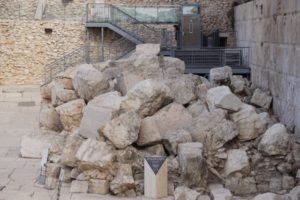 (Ruins of the Temple.)

These were the same steps that Jesus and other Hebrew boys would have climbed as a child to sit under the teaching of a well-respected rabbi. They are the same steps where the Jewish Pilgrims would gather to sing the Song of Ascents, moving up step by step as their lips sang the praises of Psalms 120 through 134. And they are also the same steps that supported Jesus’ feet as His authority was challenged by the chief priests, scribes, and elders within days of His crucifixion and resurrection.

Jesus. God in flesh. The maker of heaven and earth who spoke creation into existence. This very same Jesus is now being disrespected on the steps of His very own Temple.

And in response Jesus tells a graphic story of a man who owned a vineyard. The man makes all the necessary preparations in order to have the vineyard succeed and he then leaves the vineyard in the hands of capable farmers. When the man sends one of his slaves to collect a portion of the harvest, the farmers beat him and send him away empty-handed. This happens again and again until eventually the farmers start killing the slaves until the man is left with only his beloved son to send. He thinks, “Surely they will respect my son.” But, of course, they didn’t. They killed him and threw him out of his own vineyard. Despised and rejected.

As you and I read this story from Mark 12, we have the hindsight to know that this exact thing will happen to Jesus just days later and we want to shout to the chief priests, “Don’t do it!! He’s the Messiah! He’s come to save you, His chosen people.” But the actual audience doesn’t get what Jesus is telling them. However, He knows just how to get their attention…by quoting Scripture. Jesus asks them point blank, “Have you not even read this Scripture:

‘The stone which the builders rejected,
This became the chief corner stone;
This came about from the Lord,
And it is marvelous in our eyes’?”

And immediately the chief priests, and the scribes, and the elders would have known that Jesus was quoting Psalm 118. It’s a Psalm that they would have known in its entirety. Listen to what it says and allow the magnitude of Jesus’ point to register within your spirit:

This is the gate of the Lord;
The righteous will enter through it.
I shall give thanks to You, for You have answered me,
And You have become my salvation.
The stone which the builders rejected
Has become the chief corner stone.
This is from the Lord’s doing;
It is marvelous in our eyes.
This is the day which the Lord has made;
Let us rejoice and be glad in it. (Psalm 118:20-24, emphasis mine)

How many times have we woken up to a beautiful day and said, “This is the day that the Lord has made; let us rejoice and be glad in it,“? I know that I’ve used it thousands of times, especially when trying to wake up my children. And on another note, I’ve always wondered why Good Friday was called “good” when it was the day that our Savior was brutally killed and thrown out of His own creation. But I never thought to put the two together. How could the day that Jesus died on the cross be a day worthy of rejoicing?

Sitting there on those Southern Steps is when I finally realized that the day that the Lord has made, the day that was worth rejoicing over, was in fact Good Friday!! Yes, it was the day that the cornerstone was rejected, but it was also the day that salvation came for all people. And it was totally the Lord’s doing. This is so profound!

Jesus Christ alone is that cornerstone, the firm foundation on which we place our hope. The cornerstone should not be your parents, or your spouse, or your kids, or your friends, or your job, because Lord knows they will let you down and your foundation will crumble. There is only One who will never let you down and His name is Jesus. Don’t be like the chief priests and reject the very One who gives life. Put Him at the center of your life and build around Him.

As we prepare to celebrate our risen Lord this Easter weekend, I pray that we will remember the magnitude of the rejected stone who endured so much on that Good Friday. It truly was a day to rejoice and be glad. 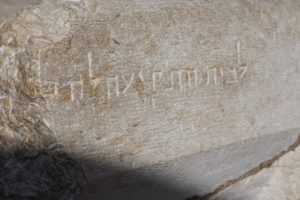 (A replica of a cornerstone in Jerusalem.)

3 thoughts on “The Marvelous Cornerstone”