“Have you ever experienced this kind of pain?…you received a phone call from the doctor’s office saying that they would rather you come in to discuss your test results.  ~ Help me, Jesus! I need You now!”

When I wrote these words in When The Earth Keeps Spinning, But Your World Has Stopped, I never imagined that our family would be experiencing them within a few short weeks.

My mother, Kathi, was recently diagnosed with Stage II Breast Cancer and we were all in disbelief. My mom? The one who eats healthy and exercises regularly? You mean to tell me that a bunch of cells coagulated together into a lump and formed cancer inside her body and now she has to have surgery, and chemo, AND radiation? Stop it. You’re joking, right?

But it was true. So we put on our pink boxing gloves and jumped up and down in the corner, ready to knock this thing out. But that’s not my mom’s style.  She’s more like Cinderella in her approach and the saying, “Have Courage & Be Kind” fits her to a tee.

From the very beginning she put her trust in the Lord and she told everyone around her that she was already healed. When she met her oncologist she told him, “You’re my doctor and I am grateful for you, but the Lord is my Great Physician.” What could he say to that but “Yes, Ma’am”?

As news spread of mom’s cancer she ended up on countless prayer lists and more than a few times she was placed in the middle of a prayer circle with people laying hands on her. She told me, “I feel the peace of the Lord. Through every turn, He’s been there. Leading me to the right doctors, opening doors, showing me kindness through others. And, oh the kindness of others! Of course, my friends have poured out their love on me but I have also felt the love of people who hardly know me. They are kind to me because they love my kids. They are sending me notes of encouragement, making me quilts for chemo treatments, praying Scripture over me and our family, posting sweet comments on social media. That’s what really touches me and makes me cry. The kindness of others.”

And it makes me cry too.

The examples are so many, from the gentleness of the lady at the barber shop who shaved Mom’s head with such tenderness to the unknown contact of my sister’s coworker who offered her apartment in Houston for my mom and dad to use during radiation treatments. It is the sweetness of the Lord manifesting itself through human hands and feet. It is community and it is beautiful to witness.

The second part of the equation is how much courage has played a part in Mom’s battle with cancer to the point that others can see courage radiating from her.  She described an exchange with a perfect stranger who was battling a serious struggle of her own whom Mom befriended. By the end of the conversation the woman told her, “I see such courage in you.”

When I asked Mom where she got her courageous spirit, she said, “It’s a gift. I didn’t get it, it was just handed to me. Growing up the way I did makes a difference. I don’t know if it is courage or not, but I feel such an assurance that God is in control and I don’t have to be in control. He orchestrated everything and He is the One who makes it livable, workable. The Lord is good. He holds you up and covers you.”

This is what it means to me to have courage and be kind. Thank you, Mom, for your beautiful, selfless example. Your testimony of God’s faithfulness in your life is an inspiration to many and I hope that one day I can be just like you. Kind and courageous. 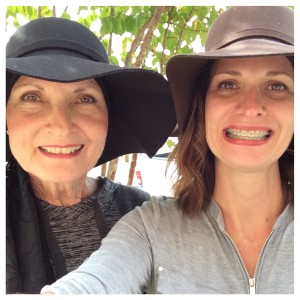 ‘“The Lord bless you
and keep you;
the Lord make his face shine on you
and be gracious to you;
the Lord turn his face toward you
and give you peace.”