Do you believe in the supernatural power of God? I do and I have for several years. But this month I got to experience a supernatural work in my own life.

This is a picture of me with some new friends on a flight to El Salvador that I almost didn’t have the privilege of being on. 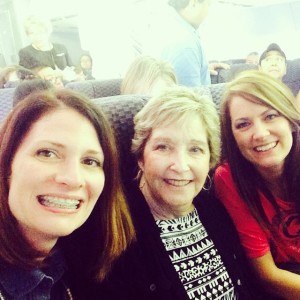 In the early summer months, I received an invitation from a Compassion Advocate to attend a women’s only mission trip with Compassion International in September to El Salvador. Knowing that I would be taking eight credit hours in my Master’s program this fall I was somewhat hesitant to commit right away. But earlier that spring, through the Compassion Experience, the Lord had led our family to sponsor a child from El Salvador. His name is Jaime (pronounced Hi-mee) and he was absolutely adorable in his white tennis shoes. My husband was instantly drawn to him and claimed him as our own. We began praying for him and writing him letters, and in one such letter Adams sent him a verse, Jeremiah 33:3: ‘Call to me and I will answer you and tell you great and unsearchable things you do not know.’ 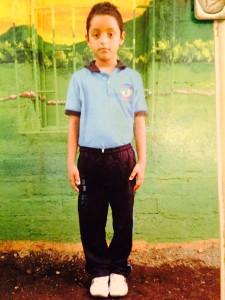 I told my friend, the Compassion Advocate, that we were actually the sponsors of a child from El Salvador and I wondered if I could meet him while on the trip, however, I did realize that El Salvador is a country, and it may not be feasible to ask for such a request. My friend was quick to call Compassion and they answered that it could indeed be done. I took this a sign from the Lord that I was to participate on this trip and I immediately began brushing up on my Spanish. (Hola!)

Two weeks before I was set to leave on my trip to El Salvador, I began to feel ill. I called my husband (thinking it was possibly food poisoning) and asked if he was feeling the same way, but he was not. I brushed it off and that next day he left for a spiritual men’s retreat in which he had been planning for several months. The following day the pain in my stomach worsened. I thought possibly I had an ulcer, so I contacted my good friend and pharmacist and asked her for antacids to help relieve the pain.  But the pain in my stomach was substantially increasing each day and eventually I was not able to stand up straight.  I finally accepted that I was in a real predicament so I drove myself to my doctor’s office and begged to be seen. He was gracious to see me, but when he delivered the news that my symptoms pointed to appendicitis I was upset.

I do not have time for this! I am leaving for my trip to El Salvador in two weeks. My husband is out of town. Doesn’t this require surgery? I can’t have surgery. I have school on Monday. What should I do?!

A CT Scan was scheduled for the following week and I was given strict instructions on what to do if I needed to go to the Emergency Room over the weekend. I called my husband and relayed the bad news with a shaky voice and more than a few tears shed. Ever the voice of reason, he assured me that the Lord was in control and he began making phone calls to surgeons to put together a game plan for us. I was grateful for the support, but I knew that his concern over my situation was taking away from his effectiveness at the retreat…which was exactly what the enemy wanted.

The next day I woke up with a pounding headache, no doubt detoxing from sugar and caffeine due to my lack of appetite. I forced myself to eat a small bowl of cereal and slipped outside to do my Bible reading before my girls woke up. While I was in the middle of reading, I started praying for healing. It was in that moment that the Lord met me where I was.

I kept saying, “I will testify. Lord, please heal me and I will testify.” And while I was praying, I literally felt the pain leave my stomach and disperse into thin air.

When I closed my eyes I saw everything that I had on my plate: Seminary, Bible Study, a Women’s Retreat, the Compassion trip, my ministry with Reflecting Light, my girls’ schoolwork. I felt the Holy Spirit whisper to me, “All these things are good and important, but you, April, are trying to do them in your own strength and not Mine. Give them back to Me and let Me accomplish what I want done.” So I did and the burden was lifted.

You may be asking yourself, “Why is she telling me all this?” The reason is, dear friend, I told the Lord that I would testify and so I am here to do just that: to testify of His faithfulness once again in my life.

The Bible Study that our Wednesday morning group is currently doing is on Spiritual Warfare and putting on the Armor of God. I don’t think that it is any coincidence that my health was attacked prior to my Compassion trip and other ministry opportunities. Ephesians 6:10-12 says, “Finally, be strong in the Lord and in the strength of His might. Put on the full armor of God, so that you will be able to stand firm against the schemes of the devil. For our struggle is not against flesh and blood, but against the rulers, against the powers, against the world forces of this darkness, against the spiritual forces of wickedness in the heavenly places.”

Rest assured, our God is victorious! But sometimes our faith requires us to stand firm and fight the enemy. Not in our own strength, but in His! And then we need to testify.

To conclude, I did have the CT Scan performed the following week so that everyone’s mind could be at ease before I left for a third world country. We were not surprised when the scan came back “normal” and there was no inflammation in or around my appendix. I was truly healed and cleared to go on what would be a life changing trip for me. But more on that next week…

Now it’s your turn! Please share any story you might have of God’s supernatural work in your life.

7 thoughts on “I Will Testify”